Status of ITS resources

Robert Gillen, formerly a professor at Oklahoma State University for 13 years and more recently a rangeland scientist with the U.S. Department of Agriculture, was announced as the director of the Western Kansas Agricultural Research Centers on Feb. 9, 2006. The WKARC has research facilities in Colby, Garden City, Hays, and Tribune. 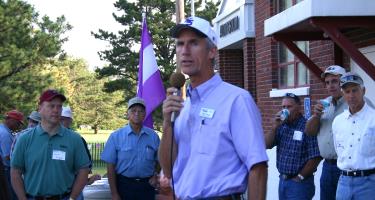 Since 1996, Gillen has worked for USDA’s Agricultural Research Service in Woodward, Okla. His specialty is rangeland management, but he has worked cooperatively with animal, plant and soil scientists.

Much of that research, he says, has emphasized the economic implications to farmers and communities.

He worked at Oklahoma State University from 1983 to 1996 where, among other accomplishments, he helped establish a new rangeland research station for the Oklahoma Agricultural Experiment Station.

Gillen’s research has earned him national distinction. He has been an invited speaker at local, regional, and national meetings of scientific and industry groups. He is recognized for his expertise in the ecology and management of forage-livestock production systems.

He notes that his vision for the WKARC is that it serves as “the primary source of information on crop and livestock production in western Kansas.

“The center should be respected by peer professionals for the rigor of its research; trusted by producers for its sound recommendations; and valued by administrators and the public as a peerless example of a public institution advancing the common good.”